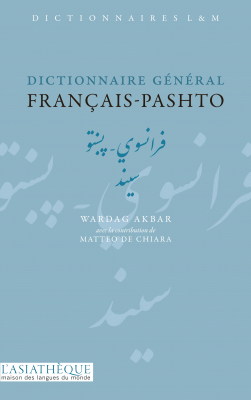 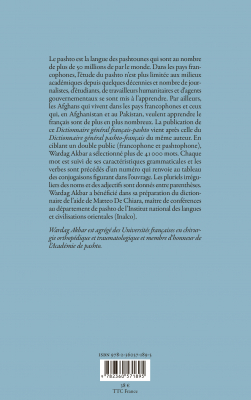 A valuable and long-awaited tool for French and Pashtophone learners

Pashto is the language of Pashtuns, they are more than 50 million worldwide. In French-speaking countries, the study of pashto has not been limited to academic circles for several decades and many journalists, students, aid workers and government agents have started to learn it. In addition, there are more and more Afghans who live in French-speaking countries and those in Afghanistan and Pakistan who want to learn French. The publication of this General French-Pashto Dictionary comes after that of the General Pashto-French Dictionary by the same author. By targeting a double audience (French and Pashto), Wardag Akbar has selected more than 41,000 words. Each word is followed by its grammatical characteristics and the verbs are preceded by a number which refers to the table of conjugations appearing in the work. The irregular plurals of nouns and adjectives are given in parentheses. Wardag Akbar benefited in the preparation of the dictionary from the help of Matteo De Chiara, lecturer in the pashto department of the National Institute of Oriental Languages ​​and Civilizations (Inalco).

Agrégé of French Universities in orthopedic and trauma surgery and member of honor of the Pashto Academy, Wardag Akbar has also translated into Pashto and published many short stories from contemporary French authors.