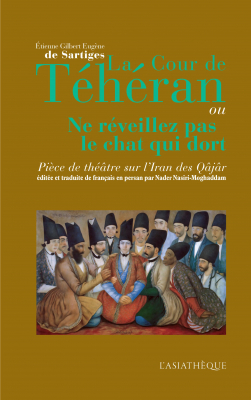 A curiosity of French literature of the 19th century: a play on Persia from the court of the Qâjâr

We follow here step by step the literary investigation full of twists of Nader Nasiri-Moghaddam. Discovering in an issue of the Review of Two Worlds the play "The Court of Tehran or Do not wake the sleeping cat" signed "Haçan Mehemet Khan", obviously a pseudonym, he makes all kinds of assumptions about its author, which leads him to the first teacher of French at the Polytechnic School of Tehran, Jules Richard. He has written a diary, unfortunately lost, and of which we have only fragments in his translation into Persian. In this journal, Nader Nasiri-Moghaddam finds some similarities with the content of the play. Persuaded to have solved the enigma, he went to the Library of St. Genevieve to consult again Volume VII of the Revue des Deux Mondes containing the piece, but he was mistakenly given the volume that contains the general table of said magazine for the period 1831 to 1874. But what a surprise when he discovered that the real author of the play is Etienne Gilbert Eugene de Sartiges. The play is given in French, in commented edition, and in its translation in Persian. What also appears in the book is the facsimile of his edition in the Revue des Deux Mondes. Nader Nasiri-Moghaddam completes the reader's vision on that time, the Mohammad Shah Qajar's vision (1834-1848), by offering the reader to get access to the translation in Persian, and in its reconstituted French version, the Journal de Jules Richard. The general introduction of the book is also translated into Persian. The first part of the book is devoted to texts in French and the second (must be read in reverse) to the texts in Persian.

Nader Nasiri-Moghaddam is professor and director of the Department of Persian Studies at the University of Strasbourg. He specializes in the history of Iran from the 16th to the 20th century and is particularly interested in the history of the art market, correspondence, stories French travelers as well as various aspects of relations between France and Iran under the Qâjâr (1796-1925).