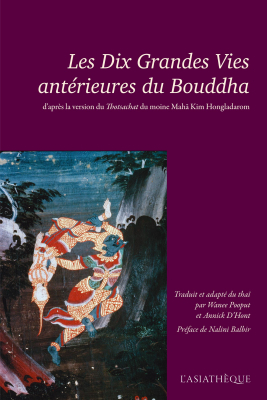 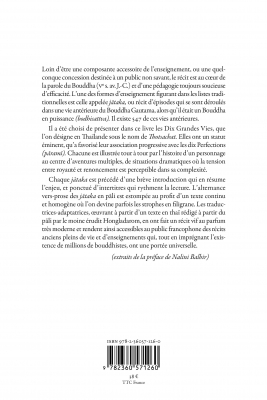 Ten stories full of life and teachings with universal reach

Far from being an accessory component of teaching, or any concession intended for a non-learned audience, the story is at the heart of the Buddha's words (5th century BC) and of a pedagogy always concerned with efficiency. One of the forms of teaching found in traditional lists is that called jātaka, or the recounting of episodes that took place in a previous life of Gautama Buddha, when he was a potential Buddha (bodhisattva). There are 547 of these past lives.It has been chosen to present in this book the "ten great lives" which in Thailand are known as "Thotsachat". They have an eminent status, which has favored their progressive association with the ten Perfections (pāramī). These are ten cardinal virtues or ten ideal behaviors, which are, according to Thai tradition: renunciation, courage, compassion, steadfast faith, wisdom, moral conduct, patience, equanimity, l honesty and giving. Each one is illustrated in turn by the story of a character at the center of multiple adventures, of dramatic situations where the tension between royalty and renunciation is perceptible in its complexity: Temiya, Mahājanaka, Suva.n .nasāma, Nemirāja, Mahosadha , Bhūridatta, Candakumāra, Nārada, Vidhura and Vessantara are the protagonists of true literary works abounding in ballads, debates, descriptions, animated dialogues which are not stereotypical. Each jātaka is preceded by a brief introduction, which summarizes the issue, and punctuated by sub-titles that punctuate the reading. The verse-prose alternation of the Pali jātaka is blurred in favor of a continuous and homogeneous text in which one can sometimes guess the filigree stanzas.

Wanee Pooput, born in Thailand, has lived in France since 1960. Now retired, specialist in the Thai language and confirmed teacher, she was a lecturer at the National Institute of Oriental Languages and Civilizations.