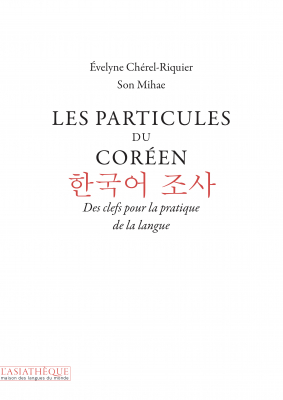 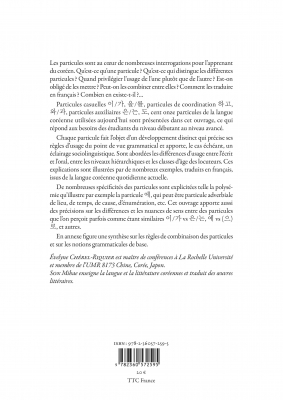 Particles are at the heart of many questions for the Korean learner. What is a particle? What distinguishes the different particles? When to favor the use of one over the other? Do we have to put them on? Can we combine them? How to translate them into French? How many are there? ... Occasional particles, coordination particles, auxiliary particles, one hundred and eleven particles of the Korean language used today are presented in this book, which meets the needs of students from beginner to advanced level. Each particle is the subject of a separate development which specifies its rules of use from a grammatical point of view and provides, if necessary, a sociolinguistic light. The differences in usage between written and oral, between hierarchical levels and the age groups of speakers are discussed. These explanations are illustrated by numerous examples, translated into French, from the current daily Korean language. Many specificities of the particles are explained. This book also clarifies the differences and nuances of meaning between particles that are sometimes perceived as being similar. The appendix contains a summary of the rules for combining particles and basic grammatical concepts.

Evelyne Chérel-Riquier is a lecturer at the University of La Rochelle and member of UMR 8173 China, Korea, Japan.