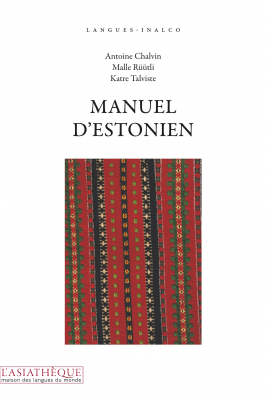 Estonian, the official language of Estonia, is the mother tongue of approximately one million people. It is also spoken today by most of the Russian community speakers in Estonia. Its origins rank it with Hungarian and Finnish, among the Finno-Ugric languages​​. This manual, developed by teachers from Institut National des Langues et Civilisations Orientales (INALCO), addresses to people wishing to acquire a basic skill in Estonian, corresponding to the first year of study at Inalco (A2 of the Common European Framework of Reference for Languages). The lessons are divided into five parts (grammar, exercises, dialogues from the grammatical forms studied, self-expression, authentic text). The dialogues and exercises refer to key situations and major themes of everyday life. An Estonian-French glossary appears at the end of the book. A Mp3 CD with recordings of dialogues and texts is added to the work. Keys to the exercises (in French) are available for free here. Antoine Chalvin is Professor of Estonian and Finnish Languages ​​and Literatures at INALCO. Malle Rüütli, reader at Inalco from 2003 to 2007, teaches at the center of the Estonian language University of Tartu. Katre Talviste, reader of Estonian at INALCO from 2007 to 2012, is a literature researcher at the University of Tartu. Original artwork by Kadri Mõõr.

Antoine Chalvin (born January 3, 1966 in Orange) is a university professor, specializing in Estonian and Finnish languages ​​and literatures at the National Institute of Oriental Languages ​​and Civilizations in Paris. He is responsible for the Estonian Studies section and is a translator from Estonian into French.