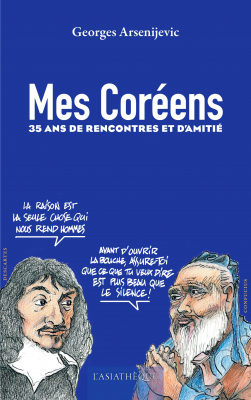 Korean people are friendly, generous, caring, supportive, but hypersensitive and easily flammable ... They place the interest of the group above the whims of the ego. All will fight without the slightest reluctance for their country. They will fight in 2002 for Korea to triumph in World Cup football as they fought in 1997 against a possible bankruptcy. But now, they are likely and stick at the first glance to gauge the person. If you miss the boat, it will take time and effort to get a second chance. Complicated ... In short, the Korean is for the French a traveling enigma. My Koreans, by Georges Arsenijevic, a consultant for 35 years at the Korean Cultural Center in Paris, is a guide to better understand the citizens of the country of the Morning calm, avoid blunders, learn to touch them to the heart, with sincerity and involvement in the relationship but above all by acquiring the knowledge of the thousand subtleties that make the difference. Because Georges Arsenijevic makes double blow and raises at the same time a reasoned portrait of the French. In a pleasant way, according to the anecdotes, it offers you in fact two guides of the mentalities. Georges Arsenijevic is a consultant to the Korean Cultural Center and editor-in-chief of the magazine Korean Culture, to which Korean French specialists, coreanologists, journalists, artists and writers contribute, as well as prominent Koreans, evoking various aspects of their culture. A psychosociologist by training and a former teacher of French as a foreign language, he has published three collections of poems. He is also the author of a book on football, and numerous articles published in specialized journals in the fields of psychology and culture.

Georges Arsenijevic, a psychosociologist by training, is an advisor at the Korean Cultural Center and editor-in-chief of Korean Culture magazine. He is also the author of Un Yougo chez les canaries (ed. PAC, 1986) and three collections of poems: Le Coeur en bandouliere (ed. Saint-Germain des Prés, 1994), Les Spécialistes (ed. Nouvelle Pléiade, 2005) and What I want to tell you since long ... (ed. Les Poètes Français, 2010).

Jean-Yves Ruaux, historian and semiologist, is the author of Understanding the Koreans (editions Riveneuve).