Michael Barry is a French-speaking and Persian-speaking American writer. Professor in the Department of Near Eastern Studies at Princeton University, and until recently professor at the American University of Kabul which he was forced to leave, as well as former consultative chairman of the Department of Islamic Art at the Metropolitan Museum of Art in New York, he is an internationally recognized specialist in Persian miniature. Particularly concerned by Afghanistan, the tragedies of which he has experienced closely within Médecins du Monde missions and as head of humanitarian teams in the field, in 1989-1990, for the United Nations, Michael Barry is the author of numerous works on Islamic art, and on the history and geopolitics of Afghanistan. 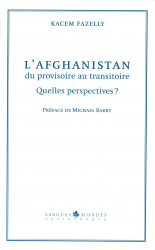