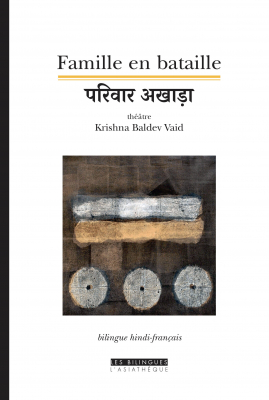 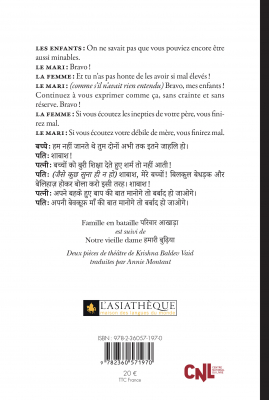 After Histoire de renaissances and Hunger, it's fire! L'Asiathèque publishes a new bilingual work by Krishna Baldev Vaid (1927-2020) bringing together two of his plays.The two pieces by K. B. Vaid presented here evoke the contemporary problems of the subcontinent in a very lively, everyday or even popular language, the comedy of which is largely based on the deconstruction of clichés and fixed phrases. One of the plays, Our Old Lady (2000) explicitly brings into play the allegory of Mother India, the great mother of Nehruvian patriotism, to deconstruct all of its features, but it appeals more broadly to the feeling of escheat that characterizes the youth of the twenty-first century in India. Refusing this mother at the same time that they do not manage to detach themselves from it […] the five acolytes (three men, two women) who are the only characters in the play always take turns in the same order to wonder about their bond with the anonymous abandoned old woman, their own cowardice, their lust, colonization and its remains, and finally human nature and the politics of history (excerpt from Annie Montaut's preface).

Krishna Baldev Vaid, born in 1927 in Punjab, present-day in Pakistan, has long had a parallel academic career in English literature and a career as a writer in Hindi. His work is distinguished by its inspirational originality, its humor, and an anti-realism that breaks with ideological and stylistic conventions. He is the author of about twenty novels, many short stories (La Splendeur de Maya et Lila, published by Caractères). His great novel on score appeared in French under the title Requiem pour un autre temps (InFolio). He is also a playwright whose six plays have been performed successfully in India.

Annie Montaut, professor emeritus of universities, is a great specialist in Vaid's work. She taught modern and contemporary French literature in Canada and India before turning to general linguistics in Nanterre, then to Indian linguistics and Hindi literature at Inalco. She is the author of around a hundred articles dealing in particular with linguistics and Indian literature. She is also a literary translator, mainly from Hindi to French.