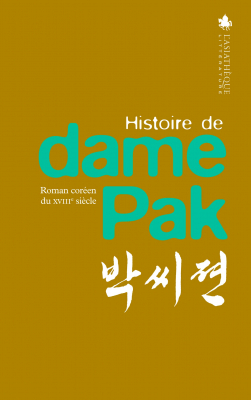 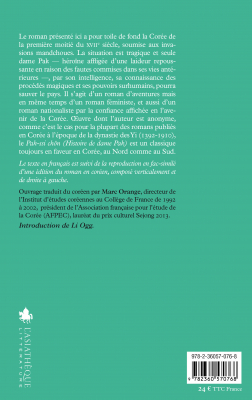 The novel presented here is set against the backdrop of Korea in the first half of the 17th century, subjected to the Manchu invasions. Facing this tragic situation stands Lady Pak, a heroine afflicted with repulsive ugliness because of the faults she committed in her past lives. But through her intelligence, her mastery of magical processes and her superhuman powers, she alone will be able to save the country. An adventure novel with astonishing feminist overtones, the Pak-ssi ch˘on - Story of Lady Pak - is a classic still celebrated today in both North and South Korea. This 18th century work is anonymous, as is the case for most of the novels published in Korea at the time of the Yi dynasty (1392-1910), This text, originally published by L'Asiathèque in 1982, has undergone an in-depth review by its translator, Marc Orange. It is further followed by a facsimile reproduction of an edition of the novel in Korean, composed vertically and from right to left.

Histoire de dame Pak
"... This tale is very accessible (...) Here we must salute the tremendous work of Marc Orange, translator, who has made this text accessible to the average reader as I am. A very nice idea, because of course you can live without having read Histoire de Dame Pak, but reading it is still more obvious, an obvious cultural, literary and even spiritual contribution ... "

Histoire de dame Pak
"... It is at the same time an adventure novel, a tale filled with poetry, appealing to the supernatural and an avant-garde novel by its feminist side ..."

Marc Orange, the translator, is an eminent Koreanologist. Holder of a postgraduate doctorate (Far Eastern Studies, Korean Literature), director of the Institute of Korean Studies at the College de France (1992-2002), he received the prestigious 2013 Sejong Award.