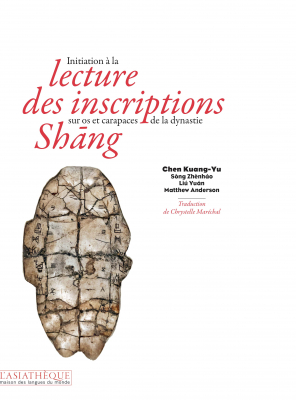 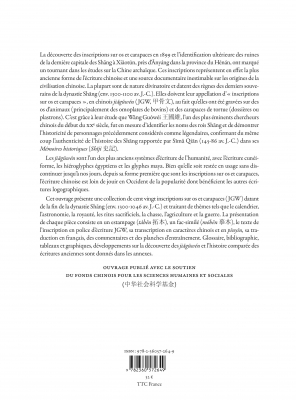 Discovering and learning to read ancient forms of Chinese writing

The discovery of inscriptions on bones and shells in 1899, and the subsequent identification of ruins of the last capital of the Shāng near Ānyáng in the province of Hénán, a turning point in studies of archaic China. These inscriptions indeed represent the oldest form of Chinese writing - in constant use until our days - and an invaluable documentary source on the origins of Chinese civilization. The most are divinatory in nature and date from the reigns of the last rulers of the dynasty Shāng (c. 1300-1100 BC). They owe their name of "inscriptions on bone and shells" in Chinese jiăgŭwén, to the fact that they were carved on animal bones and turtle shells and plastrons. It was through their study that Wáng Guówéi, one of the most prominent Chinese researchers in the early twentieth century, were able to identify the names of the Shāng kings and demonstrate the historicity of characters previously considered legendary, at the same time confirming the authenticity of the story of the Shāng reported by Sīmă Qiān in his Historical Memoirs. The jiăgŭwén are one of the oldest writing systems in humanity, with cuneiform writing, Egyptian hieroglyphics and Mayan glyphs. This book presents a collection of 120 inscriptions dating from the end of the Shāng dynasty and dealing with various themes (royalty, calendar, rites,…). The presentation of each piece consists of a stamp, a facsimile, the text of the inscription in jiăgŭwén font, its transcription in Chinese characters and in pīnyīn, its translation into French, comments and training boards. Glossary, bibliography, tables and graphics, developments on the discovery of jiăgŭwén and the comparative history of ancient scriptures are given in the appendices.

Readers of this book will be able to solve the training boards by going to the website 殷契文渊 site (aynu.edu.cn) which presents all the listed jiăgŭwén with their transcription.

"... This is the largest choice of translations of Shang inscriptions ever published in the French language. This book certainly fills a gap and will delight all students and teachers interested in the content of these inscriptions. ... "

Sòng Zhènháo directs the Research Center for the Study of Bones and Shells at the Chinese Academy of social sciences (Bĕijīng).

Liú Yuán is an associate researcher at the Institute of History of the Academy Chinese Social Sciences (Bĕijīng).

Matthew Anderson is an independent researcher on the Ancient china. He holds a Ph.D. from the University of Pennsylvania (Philadelphia) on languages and civilizations of East Asia.

Chrystelle Maréchal is a research fellow at the CNRS, attached to the Center for Linguistic Research on East Asia at the EHESS. His research focuses on the evolution of Chinese writing from the Shāng (13th century BC to the 11th century BC) to Hàn (206 BC. .-220 AD).