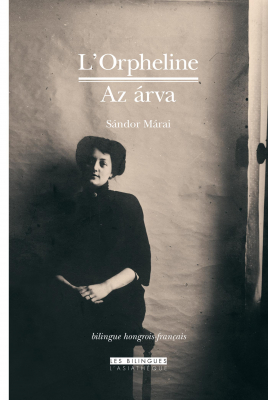 Sándor Márai was an all-round writer who wrote not only novels and short stories, but also plays, essays and poems. To date, only his novels and memoirs have been published in French. With the publication of "L'Orpheline," French-speaking readers will be able to appreciate Sándor Márai's talent as a short story writer. Sándor Márai, a major 20th-century author, has been known to and appreciated by French-speaking readers since the 1990s thanks to the French translations of several of his novels and memoirs. He was a humanist and a great European, a witness to the trials and tribulations that this continent was experiencing, between the melancholy of a bygone world and continual wonderment at the inexhaustible energy of life. These five short stories are taken from his collection Mágia (Magic), published in 1941 by Révai. Sándor Márai was at the height of his fame at this time. Mágia is a collection of short stories that revolves around the opposition between profession and private life.

Sándor Márai (1900-1989), a major author of the 20th century, is known and appreciated by readers French speakers since the 1990s thanks to the French translations of several of his novels and his memoirs. He was a humanist and a great European, witness to trials crossed by this continent, between nostalgia for a bygone world and continual wonder at the inexhaustible energy of life.

Catherine Fay has translated since 2007 for the Albin Michel editions many great texts of Sándor Márai, notably the First Love, the Sister, the Foreigners and, in 2017, the Last Day in Budapest.