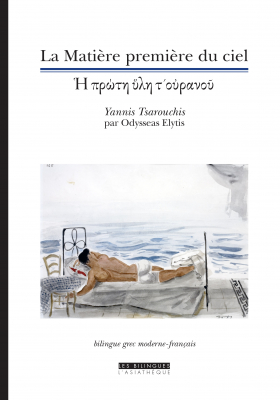 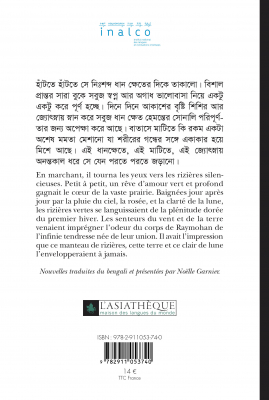 (The Primary source of the sky)

The meeting of two major figures of Greek culture

The text that Odysseas Elytis (Nobel Prize 1979) dedicates to Yannis Tsarouchis, presented in this very inspired bilingual modern Greek - French book, is of a literary quality that places it far above a simple critical article. Elytis has the gift of transforming everything he touches into poetry, but it is also that the text was written at a privileged moment, during which the two men, reunited in Mytilene, worked together and put much in common. The text is well known in Greece, where it is seen as an unrivaled approach to the work of Tsarouchis. It also appears as a preface in the catalog of the retrospective that the Bénaki Museum devoted to Tsarouchis, in Athens, in 2016. An unparalleled commentary on a pictorial work, the text constitutes at the same time, and above all, a digest of the ideas and intuitions that underlie the work of Elytis, on painting, the nature of art, which defines the artist, the relationship between tradition and modernity, what it is to be Greek. Sixteen pieces were chosen by the pas a counterpoint to the text, to associate closely with the detail that Elytis expresses. They will illustrate with precision the point of the poet; and on the other hand will constitute a corpus of images in which we find the diversity of style that characterises the production of Tsarouchis. These drawings and paintings are reproduced with the kind permission of the Tsarouchis Foundation in Athens, which holds the rights to all of his work.

Odysséas Elytis was born in 1911 in Heraklion, Crete. His first poems appear in review in 1935. In 1940, Elytis went to the front as an officer. Wounded, he narrowly escapes death. In 1948, he leaves Greece devastated by the civil war and settles in Paris where he binds with Picasso, Léger, Matisse, Giacometti and Chagall, and became a friend of René Char and Camus. Back in Greece in 1951, and becoming a leading figure in the intellectual life of the country, he publishes his most completed poems, in particular the famous "Axion Esti" ("He is worthy [of you celebrate] ", beginning of a liturgical hymn), published in 1960. This period established his fame international, crowned with the Nobel Prize for Literature in 1979.

normalienne and aggregate of classical letters. She has collaborated among others on the bilingual editions of Rives du Congo and the Forty Columns of Remembrance by Annemarie Schwarzenbach.

Yannis Tsarouchis, born in Piraeus in 1910, former student at the Fine Arts of Athens, worked at combine within his work the Byzantine tradition, popular art, classical Western art and contemporary art, in a fusion that makes it one of the best representatives of renewal Greek art of the 1930s and subsequent decades. Close to artistic circles Parisians, in relation with Matisse and Giacometti, he settled in Paris in 1967. But he never stopped not to travel to Athens to work there. In 1980 the Grand Palais dedicated to his work a great exhibition. He died in Athens, in his house-museum, in 1989.