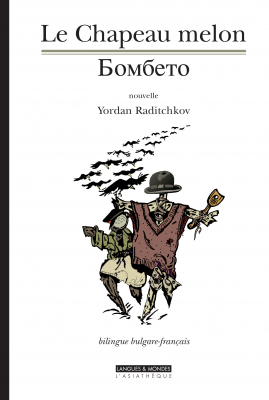 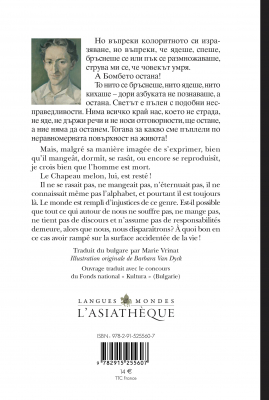 Le Chapeau melon (The bowler hat) is an allegorical account of the history of Bulgaria during the rise of the communist and totalitarian regime, as seen through the eyes of a bowler hat, the main character. The short story starts with the bowler hat's arrival in a Bulgaria still under monarchy - it is a genuine Italian Borsalino, bought in Italy by a Bulgarian. Everything is new, imposing, and surprising in this poor but majestic Bulgaria. Then, one day, the hats and bowlers are sent into exile in closets and boxes because a new force has come to power : the Cap. The fascination of this story lies in its point of view, that of the impartial and "innocent eye" of the bowler hat. This choice of perspective serves to underscore the absurdity of the totalitarian regime. With this external point of view, the book manages to concisely allude to the destructive impacts of a totalitarian regime on individual. It tells of the installation in 1944 of a popular Tribunal which judged and executed opponants and anyone identified as bourgeois or monarchist, of the internal exile of others, of the passive resistance of some, and of adherence to the new regime out of fear or opportunism. Raditchkov is often compared to Gabriel García Márquez for the magic that fills his fictional universe, intimately tied to country life. This magic has disappeared from our rich and modern world. The paradox, as presented by Raditchkov, is that poverty engenders a rich imagination, a marvelous world which simply disappears under the flood of abundant materialism.

Le Chapeau melon
"... Le Chapeau melon is precisely the hat, one might say, from which Radichkov, a magician of writing, comes out in rosary beads all kinds of scenes from contemporary Bulgarian history." With irony, with tenderness ... "

Yordan Radichkov is a Bulgarian writer of great notoriety in his country and abroad, born in 1929 and deceased in 2004; he is the author of countless stories, short stories and plays. He created most of his fruitful work under totalitarianism while straying from the paths imposed by communist ideology and the method of socialist realism.