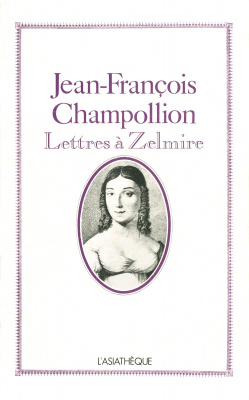 “These letters remain such moving testimonies of the very rich sensitivity of the illustrious scholar. For a long time already, Champollion's correspondence should have placed him in the series of great letter-writers...” (excerpt from the Preface by Jean Leclant).

Angelica Palli was already a member of the Labronica Academy when, on March 11, 1826, Champollion was elected a corresponding member. Shortly after, during the session of April 2, in the presence of Champollion, Angelica Palli improvised an ode in honor of the decipherer of the hieroglyphic system. He was extremely touched by the homage that came to him from this young and intelligent Livornese woman of letters. A loving friendship was born then. This is evidenced by the twenty-nine letters presented here, written by the Egyptologist to Angelica Palli from 1826 to 1829. The young woman's answers have not been found. They were probably destroyed.
Champollion was already married, Angelica Palli engaged. She will break off her engagement, but it does not seem that the relationship of the two young people had anything to do with it. The feelings of Champollion, who takes the name of Zeid in this correspondence, very quickly responds to an increasingly marked indifference on the part of the young woman who appears in the letters under the name of Zelmire.
Precious documents that shed light on the intimate personality of Champollion, these letters are rich in sentimental abandon and confessions on his conception of life, on his very pessimistic philosophy of history and his ideas, even more pessimistic, on human nature. We see him inserted into Italian intellectual society. We discover his literary tastes, his ideas on education. His activities as an Egyptologist are of course present, going as far as a real lesson exposing the deciphering system, but he does not disdain to give Zelmire advice and hygiene recipes. His ironic and biting character manifests itself in most of his letters; even at the tenderest moments, his sparkling wit shines through in brilliant prose.

Jean-François Champollion (1790-1832) studied Latin, Greek, Hebrew, and Coptic at a very young age, before learning Persian, Sanskrit and Arabic. Thanks to facsimiles of the Rosetta Stone, he discovered in 1809 that there existed, between the hieroglyphs and the demotic, a third writing, the hieratic, a cursive deformation of the hieroglyphs. He thus deciphered the first royal cartouches in 1821. Appointed curator of the Egyptian department of the Louvre in 1826, he became professor of Egyptology at the Collège de France in 1831, a year before his death.