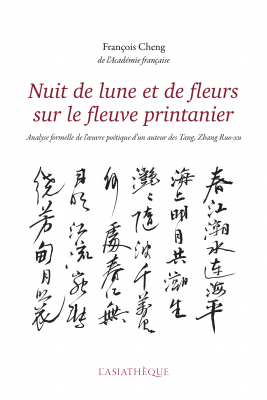 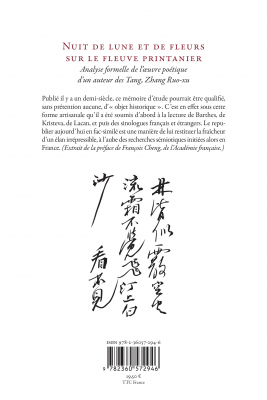 In his Introduction, François Cheng reviews the history of this text, a study report written as part of the Practical School of Higher Studies, which later became École des Hautes social science studies: "Published half a century ago, this study brief could be qualified, without any pretension, of "historical object". It is indeed in this form artisanal that it was first subjected to reading by Barthes, Kristeva, Lacan, and then French and foreign sinologists. Reposting it today in facsimile is a way of it to restore the freshness of an irrepressible momentum, at the dawn of the semiotic research initiated then in France. "And he continues:" The original title of the text is Analyze formelle de l'oeuvre poétique from a Tang author: Zhang Ruo-xu. Of this poet of the 7th century, we do not know, in reality, only one poem, the famous "Night of moon and flowers on the spring river", comprising thirty-six verses. " For this facsimile reissue where the calligraphies of Hsiung Ping-ming were also preserved, François Cheng chose to give the work the very title of the poem.

François Cheng was born in 1929 in Nanchang, in the province of Jiangxi. He is a writer, poet and Chinese calligrapher, naturalized French in 1971, member of Académie française since 2002. He is the author of numerous translations of Chinese poets into French and of French poets into Chinese, essays and monographs on Chinese art, Chinese thought and aesthetics, collections of poetry and novels.

The collection "Empreintes chinoises" is directed by Catherine Despeux. Beyond fashions and disciplines, the "Empreintes chinoises" collection seeks in the field of possibilities of what touches us in certain aspects of Chinese culture, these imprints which, such as those left by the animals at the origin of Chinese writing, are on the filigree of the culture of the Middle Kingdom. The books in the collection invite you on an inner journey encountering the other one. They bring the reader into the intimacy of men and women, whether they are scholars or Chinese painters, strongly committed to spirituality, from little known ethnic groups or communities... ; they make discover Chinese culture with its sensibilities, its imagination, its representations, its beauty.