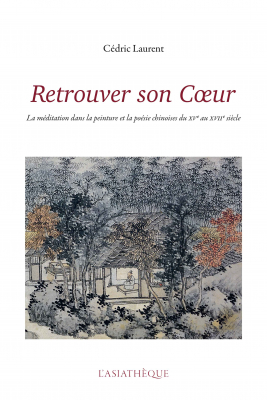 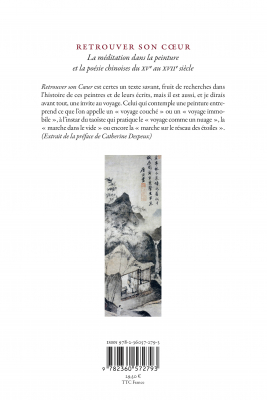 The Ming scholars (1368-164) [...] felt that "in meditation, in the mountains, the days lie down ". They listen to the streams, the waterfalls, the sounds that match the beats from the heart with a delicacy where the subtle becomes indistinguishable and indistinguishable. They enter little by little little in nature and in a state where all the sounds perceived simultaneously plunge them into the ultimate silence, where not one noise wins over another. This is "to find your Heart", in Chinese xin, a term which designates both the heart as that organ, and the mind, the center of being. [...] Many painters have thus made meditation one of the themes of their painting, theme little put forward until this study by Cédric Laurent who, through the presentation of very beautiful texts, poems and paintings, sensitizes us to this aesthetic and to this philosophy of being developed and put into practice by scholars of the Ming, a golden age for Chinese landscape painting. He makes us realize the importance of meditation in them and among the neo-Confucians, especially those from the School of the Heart, who reinterpreted the texts classics of Confucianism in relation to Buddhism and Taoism. (Extracts from the preface by Catherine Despeux)

Catherine Despeux, a well-known sinologist and author of numerous books on Taoism in particular, is professor emeritus at Inalco and administrator of the Institute of Buddhist Studies.

The new collection "Empreintes chinoises" directed by Catherine Despeux Beyond fashions and disciplines, the “Chinese Footprints” collection will seek in the field of possibilities what touches us in certain aspects of Chinese culture, these imprints which, such as those left by the animals at the origin of Chinese writing, imprint on the background of the culture of the Middle Kingdom. The books in the collection invite you on an inner journey through the detour through the other. They bring people into the intimacy, whether they are literati or Chinese painters, men and women strongly committed to spirituality, ethnic groups or communities with little known; they make you discover Chinese culture with its sensibilities, its imagination, its representations, its beauty.