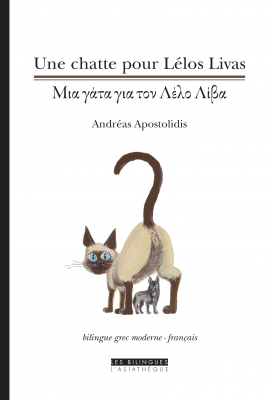 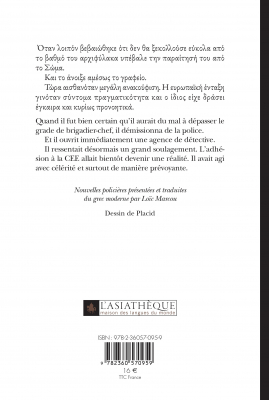 In the first short story: "A cat for Lélos Livas", which gives its title to the book, Apostolidis captures the stereotypes of the noir novel to better pastich them. His detective, Lélos Livas, recalls the American detective noir novel: he's an outcast and a "loser" who drowns the failures of his life in drink. For lack of a real case to bite into, the Greek detective will be forced to investigate the disappearance of a Siamese cat ... The second short story, "Nightmare", in touch with Greek political history, evokes, through an incredible adventure full of picturesque twists and turns, a particularly tragic episode of the year 1944, when the main Greek resistance movement opposed the English landing in Athens after the departure of the troops German forces and the Greek nationalist forces assisting the British forces. A little old man died in troubled circumstances but it is better not to go into depth, a family of high society is involved through a rebellious offspring. However, for the sake of example and because of little consequence, Paul, the young man's companion in his tribulations is executed.The third short story, "An Adventure of Notis Kangas", which Apostolidis went to look in a pulp magazine bringing together the stories of authors under pseudonyms, takes up the themes of the noir novel with a parody side: stolen jewelry, compromising letters and blackmail, femme fatale with bewitching charms and a mysterious personality, with, yet another times, an inspector acting on the fringes of police orthodoxy.

Andréas Apostolidis, translated on behalf of Agra editions a large part of the work of Raymond Chandler, Jerome Charyn, James Ellroy, Dashiell Hammett, Patricia Highsmith, Chester Himes, not to mention stories from Agatha Christie. While continuing his translations and carrying out various journalistic investigations giving rise to books or documentary films, he embarked on the writing of detective stories from the mid-nineties.