William-Robert Sivel, after graduating in electricity, was hired being audacious as a sound engineer for the Mission Citroën Centre-Asie, nicknamed "La Croisière jaune" which took place from April 4, 1931 to February 12, 1932. He was the youngest of the expedition and his memoirs of this great adventure were published by L'Asiathèque under the title Ma Croisière Jaune. It was on his return that he started in the cinema. In his 50-year career, he has provided sound direction for more than 100 films, from René Clair and Jacques Tourneur to Bertrand Blier and Jean-Luc Godard, including Henri-Georges Clouzot, Claude Autant-Lara, Luis Buñuel, Peter Brook. He was twice awarded the César for best sound, in 1979 for "L’État sauvage" and in 1983 for "La Passante du Sans-Souci". 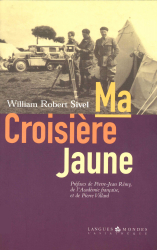