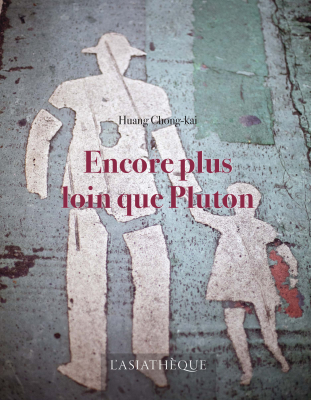 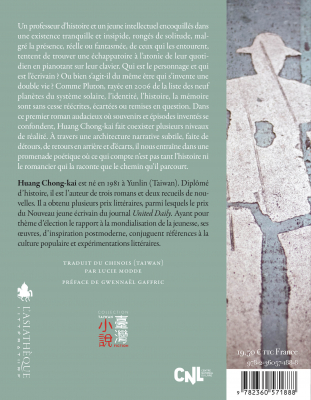 A history professor and a young intellectual trapped in a quiet and insipid existence, consumed with loneliness, despite the presence, real or fantasized, of those around them, try to find an escape from the sluggishness of their lives. daily by tapping on their keyboard. Who is the character and who is the writer? Or is it the same being who invents a double life? Like Pluto, expelled in 2006 from the list of the nine planets of the solar system, identity, history, memory are constantly rewritten, discarded or questioned. In this first daring novel where memories and invented episodes merge, Huang Chong-kai brings together several levels of reality. Through a subtle narrative architecture, made of detours, backtracking and deviations, he takes us on a poetic walk where what counts is not so much the story or the novelist who tells it as the path that he travels.Critically acclaimed upon its release in Taiwan in 2012, this novel resulted in a simplified Chinese version published in China in 2013.

Book: "Encore plus loin que Pluton", by Huang Chong-Kai, published by L’Asiathèque
"... In this novel, the true and the false merge as the main character, whose name we do not even know, builds and destroys his memories. He confuses reality and phantasies while seeking to fill his emotional void, through his identity mistakes ... "

Encore plus loin que Pluton
“...Encore plus loin que Pluton as an existentialist questioning through a fiction / reality whose writing sometimes makes and sometimes undoes the framework. (...) the author's avatars are mutually written without excluding each other, combine their existences between past, present and future, between alternative or parallel realities, in a game of mirrors where reflective writing invites fear of heights ... "

Encore plus loin que Pluton
"... a completely singular and confusing first novel where the reader can get lost so much the narrative construction is complex, and made up of flashbacks, unless he manages to let himself be lulled by the words, by real or invented memories ... "

Huang Chung-kai was born in 1981 in Yunlin (Taiwan). A history graduate, he is currently editor-in-chief of the literary magazine Nouvelles. He is the author of three novels, two collections of short stories, and several other short stories in journals and magazines. He has already won several literary awards, including the New Young Writer Award from the United Daily newspaper. He is part of the new and rising generation of Taiwanese writers, regularly dealing in his novels with the relationship of Taiwanese youth to globalization. His works, of postmodern inspiration, combine references to popular culture and metafictional literary experiments.