Mamadou CISSE has reinstated the teaching of Wolof language and civilization at the Institute of Oriental Languages ​​and Civilizations (INALCO), in Paris, after more than half a century of interruption. His predecessor in this chair was President Senghor. After ten years in Paris, where he obtained his doctorate and taught in addition to the Wolof language and culture, French as a foreign language (FLE), he went to the National Museum of Ethnology in Osaka where he was a guest researcher. After a brief stint in Niger, he decided to move back to Senegal where he taught at the Department of Linguistics at Cheikh Anta Diop University. Within the doctoral school of Language and Communication Sciences, he is in charge of lexicology and translation studies. His recent work focuses on the language policy of the Senegalese State, in particular the relationship between national languages ​​and the official language, French, as well as on the writing of African languages ​​in Arabic characters. He is currently preparing an anthology of Senegalese literature. Born in 1956 in Senegal, Mamadou Cissé is an accomplished polyglot. In addition to French, he is fluent in English, Wolof, Fulani, literal Arabic as well as the Lebanese and Maghreb Arabic dialects. 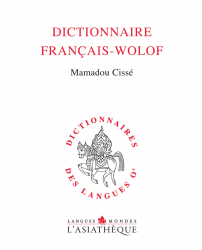