Ngwé Tayi, poet and novelist, had the real name Ma Khing Yi. Born in 1925 in Yangong (Rangoon), she died in 1958. In poor health, she could not attend school for a long time, but took lessons in classical Burmese literature and English. In 1952, she married a writer, then traveled to India and Europe (England, Holland, Belgium, France, Italy, Switzerland) and returned by boat, visiting Egypt and Ceylon in the process. She died at the age of thirty-three, leaving a little girl. In her brief existence, she wrote tirelessly, composing about eight hundred poems, some of which were published in 1960. She left us short stories, such as "Like a bird" (Chou mewa, March 1956) in which shines through, in addition to his poetic sensitivity, his gifts of observation, his psychological finesse and a warm sympathy for people. His poems reveal another aspect of his vision of the world: disenchantment, the refusal of illusion, through which is expressed his Buddhist conviction of the impermanence and the vanity of the goods of this world. A literary review, which is still published, bears the name of Ngwé Tayi and thus perpetuates the memory of this endearing personality, much loved by the public. 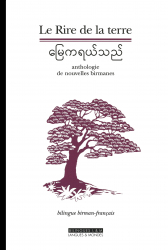