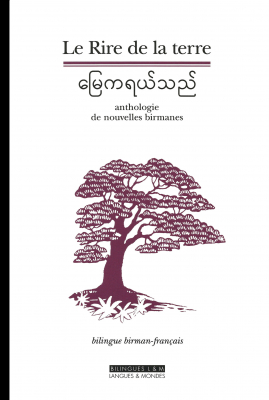 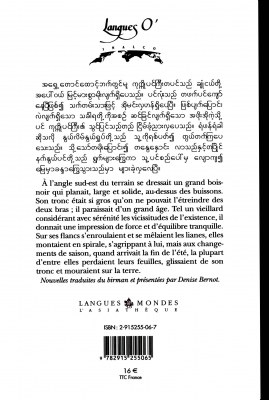 (The laughter of the land)

The seven short stories in this collection, written throughout the 1950s, are a testament to the extraordinary literary explosion which followed Burmese independence in 1948. This upsurge only appears sudden: in reality, it corresponds to a gradual awakening that had been quietly simmering for thirty or forty years. This new literature became the voice of the modern era, first through translations and adaptations of foreign literature and finally in original works. Through the choice of texts, the vivacity of the translation, and the introduction and remarks, Denise Bernot allows us to experience the unique flavor of these sensitive and original tales.

Denise Bernot, maiden name Clément, born on February 4, 1922 in Paris and died on May 12, 2016 in Antony, is a French linguist, specialist of Burmese language. She headed the Burmese Studies Department at INALCO (Institut national des langues et civilisations orientales). Co-author of Manuel de birman (Burmese Manuel), of Grammaire birmane (Burmese Grammar) and Dictionnaire français-birman (French-Burmese Dictionary) published at L'Asiathèque, she is the author of numerous books and translations on Burmese language and literature.

Tè Tô, or Ong Phé by his real name, was born in 1914 in Syriam. From 1930 he studied at the University of Yangong (Rangoon). Upon completion of his studies, he exercised various liberal professions, teaching English at the university, then working in the English colonial administration as a translator, he became a representative of Associated Press. Little by little he approached the world of letters, being part of literary commissions, of the team of the Burmese Encyclopedia, editing newspapers. For a long time he had published translations from English, but with his "Official" (Ming hmou dang, 1940) he made an original work. This novel received the “Sapé bei'mang” literary prize in 1950. The author describes the pre-war administration using his personal experiences. He has written plenty of short stories, which range from an unassuming little story to raw realism and drollness. like his “Brainless Ba Mo” (Chou mewa review November 1955), with a ruthless and sarcastic character analysis, as in “On edge” (Chou mewa, September 1957); Tè 'Tô also wrote essays on literature and poems.

Khing Mung Dji was born in 1927. Besides Mô Wé, he used various pen names, writing extensively, in very different genres: translations of English works, scholarly works, detective and spy novels, literary short stories, newspaper articles. He began to be known in the world of letters from 1946, through his novels; his short stories were mainly published in the magazines Ngwé Tayi and Mya wedi, as "The force of habit", published in April 1956. In his most personal works, he appears as a generous writer, sensitive to all forms of exploitation, full of humor and tenderness. Mô Wé died in 1967.

His real name Phe Çang, Çadou, was born in 1917 into a poor family; he attended school until the 9th grade and then had to work. Engaging in politics, he entered before the war in the nationalist association "Dô bema". He founded a printing press; during the war he followed the liberation army of General Aung Shang (Aung San). After the war, he devoted himself to literature, writing novels, such as Ta thè ga mya kô kô, "The Valorous Dear Soldier", Eçè, "Life", and many short stories, in which he proved to be a fine psychologist, sensitive to social and ethnic problems, as in "Amina" published in Chou mewa in September 1957. He won the Sapé bei'mang prize in 1951. In addition to his activities as a writer, Çadou published a review and took care of a film company.

Ngwé Tayi, poet and novelist, had the real name Ma Khing Yi. Born in 1925 in Yangong (Rangoon), she died in 1958. In poor health, she could not attend school for a long time, but took lessons in classical Burmese literature and English. In 1952, she married a writer, then traveled to India and Europe (England, Holland, Belgium, France, Italy, Switzerland) and returned by boat, visiting Egypt and Ceylon in the process. She died at the age of thirty-three, leaving a little girl. In her brief existence, she wrote tirelessly, composing about eight hundred poems, some of which were published in 1960. She left us short stories, such as "Like a bird" (Chou mewa, March 1956) in which shines through, in addition to his poetic sensitivity, his gifts of observation, his psychological finesse and a warm sympathy for people. His poems reveal another aspect of his vision of the world: disenchantment, the refusal of illusion, through which is expressed his Buddhist conviction of the impermanence and the vanity of the goods of this world. A literary review, which is still published, bears the name of Ngwé Tayi and thus perpetuates the memory of this endearing personality, much loved by the public.

Çeing Phé, known as “Çeing Phé Mying”, was born in 1914 in Boudeling (Budalin) and died in 1978. He studied law at the University of Calcutta, where he also learned Pali. Delegate in 1936 to the Indian National Congress, in 1939 he participated in a mission to China. During the war, he acted as a liaison between the Allies in India and the Burmese resistance. After the war, he took an active part in political life: he was a member of the Anti-Fascist League until 1945, officially took part in several Burmese missions: in China, in England, in Cairo. After a passage in the Communist Party, which he left, he founded, in 1952, the “People's Unity Party” of which he was the general secretary until 1959, then he was one of the leaders of the “People's Comrade Party”; from 1956 to 1961 he sat as a member of Parliament; under the Né Wing government, he remained very involved in political life through his writings, demonstrating his fidelity to the “Burmese Way of Socialism”. His role in the Burmese literary world was very important: as a writer, of course, but also as president of the Association of Writers (1956-1958) then as its vice-president (1961) and as editor of a periodical: Bôtethaung. He was, moreover, the ambassador of burmese culture abroad: influential member or leader of cultural associations such as the “Soviet-Burma Cultural Association”, he was part of a delegation of Burma writers in China, in Japan and North Vietnam in 1961. His literary career began with the novel "The Bonze up-to-date" in which he denounced the worldliness of certain bonzes; the reaction was violent and the book's success in bookstores was considerable. He continued to publish, always caustic, emphasizing without complacency the faults of men and especially of societies, but at the same time warm and passionate under the humor of the line. In his long autobiographical novel "As the Sun Rises in the East" and in his travelogues, historical interest is added to literary value. Most of his very numerous short stories, first published in reviews, were then collected in a anthologies. Throughout his work he has fought against corruption, hypocrisy and injustice which he described with a sort of false candor.