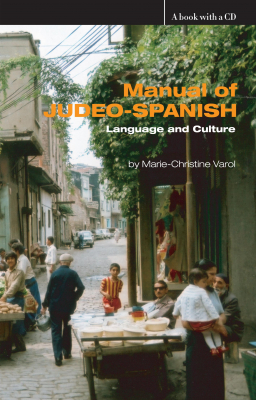 This book is the English version of the Manuel de judéo-espagnol (French Judeo-Spanish manual), previously published by L’Asiathèque. It embodies a part of the history of the Jewish populations expelled from Spain in 1492 that took refuge in the Ottoman Empire around the Mediterranean sea. There they created Sephardic communities whose culture and traditions are still very lively. This language was enhanced by meeting and adopting parts of other languages (such as Hebrew, Turkish, and French). This lead it to become a linguistic and cultural crossroads particularly interesting for Spanish language specialists. This book perfectly reproduces the French version, Manuel de judéo-espagnol, published by L’Asiathèque, and the same goes for the audio CD (with a few necessary changes). The book is composed of 9 lessons, numerous texts and photographs illustrating the Judeo-Spanish culture. This manual shakes the archaic trappings off of a continually changing language, with a methodology of great breadth and depth. Marie-Christine Varol received the Alberto-Benveniste prize for her work on Judeo-Spanish.

Marie-Christine Varol is a university professor. Specialist in Judeo-Spanish language, literature and civilization at the National Institute of Oriental Languages and Civilizations (Inalco), she is the author of several books on Judeo-Spanish, including this manual, third edition of the book published in first edition in 1998.