Damien Ligot is a teacher of Chinese and translator of this language. A former student of the Institute of Anthropology at the National Tsing Hua University in Hsinchu (Taiwan), he holds a PhD in Studies on Asia and its diasporas (Jean Moulin Lyon III University, January 2012). Musician and lover of performing arts, he has observed the cultural pluralism of Taiwan for more than fifteen years through this prism. He is also interested in palaeography, the history of religions and popular beliefs, traditional medicines, trance phenomena, as well as the multiple expressions of shamanism in the contemporary world.
He translated in particular (from Chinese to French):
Lay Chih-ying, "Libellule rouge", in the collection of short stories Formosana - Histoire de démocratie à Taiwan, L'Asiathèque, 2021
Chang Wan-k’ang, “Videoman”, in the collection of short stories Taipei - Histoires au coin de la rue, L’Asiathèque, 2017
Ping Lu, “Virtual Taiwan”, in the Special Taiwan issue, Editions Jentayu, 2016 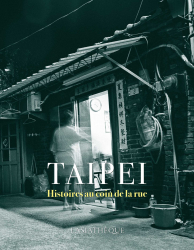