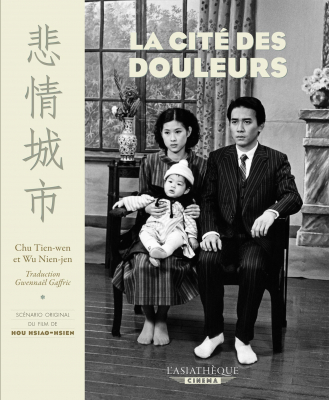 The first original screenplay published in French of a Chinese-language film, the screenplay for the City of Pain (Golden Lion in Venice in 1989), a masterpiece of Taiwanese cinema directed by Hou Hsiaohsien, is presented here as a literary work. Co-written by Chu Tien-wen and Wu Nien-jen, it makes us feel intimately, through the abundant and tragic story of the Lim family, the “pains” of the island of Taiwan following the dramatic events of February-March 1947, a tragic episode that no film had yet dared to mention. The reader will be able to appreciate the complexity of the political situation and social relations at the time when the Japanese colonizer is giving way to the authoritarian government of the Republic of China. They will (re)discover a brilliant woman of letters well known for her novels and short stories, and a remarkable screenwriter-dialogue writer (and director). They will also gain an in-depth understanding of a powerful and original cinematographic work through both its political and its memorial approach.

Chu Tien-wen is a world famous writer. It is published in France and has won the 2015 Newman Prize for Chinese Literature. She is also a screenwriter, with, among others, The City of Pain (published in the Asiathèque in 2015).

WU Nien-jen is a Taiwanese screenwriter, actor, director and producer. He has co-written several films by Hou Hsiao-hsien.

Wafa Ghermani, author of the preface, recently defended his doctoral thesis: “Cinema and national identity: the case of Taiwan from 1895 to the present day”. Since 2006, she has contributed to several publications on Taiwanese cinema.